While spending a week in San Miguel de Allende, a city in the Mexican highlands that I love, I heard stories of a nearby ghost town that has gained new footing as a haven for artists.  My curiosity was piqued by local expats around town, mostly retired Americans now living in San Miguel, who  told me that the former mining colony of Mineral de Pozos was being repopulated by a small number of Mexicans, Europeans and Americans drawn to the city’s austere beauty, reasonable housing prices and serene, small town atmosphere.  I was intrigued.

Some quick research revealed that this newly minted mini hot spot was once a rollicking melting pot of some 50,000 inhabitants, all involved in silver mining and smelting, an industry fueled initially by Jesuit ingenuity and Indian labor and later by European miners. When the minerals eventually played out — several gold and silver bonanzas occurred from roughly 1576 through the Mexican Revolution of 1910 —  the population dwindled, leaving behind abandoned houses, mine workings and a good-sized unfinished church. Today’s population fluctuates between 1,000 and 4,000 people.  I soon booked two nights at one of Pozos’ three inns and arranged a car hire.  Pozos was only a thirty-five-mile drive away.

Clean mountain air accompanied the drive.  At 7,500 feet above sea level the town sits in the opening of a mountainous ridge. En route we passed clumps of huge old mesquite trees tucked into gently rolling hills.  The sight of ruins draped in vines, along with long neglected centuries old haciendas, in such a primal desert landscape evoked a sense of time and place reminiscent of Tuscany colored by a Mexican paintbrush.  Georgia O’Keefe would have loved it.

Upon arrival in town, I wondered what to expect in the way of lodging at the recommended Posada de Las Minas.  Would I be spending the night in a ruin or a modern upstart out of place with Pozos’ almost mystical persona?  The posada sat at the top of a slight rise.  Below it, the dome of the historic San Pedro Church rose above the town plaza and my first wish was for a room with a view of the dome. 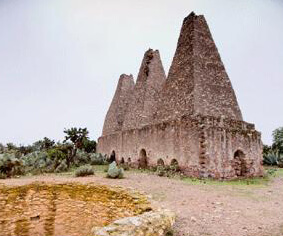 Upon entering the front door of the posada, I did a double take.  Built in the courtyard style, a grand upper level veranda, draped in bougainvillea and open to the sky above, looked down upon a large al fresco dining area.  Overhead a retractable roof provided shelter in case of inclement weather.  Innkeeper Julie Winslow, looking like a contessa in a long skirt and white lace ballerina blouse, greeted me warmly.  The inn was quiet that afternoon and I had my choice of several rooms.  Naturally I chose the one with a view of tiled roofs and the glorious pink colonnaded dome of Iglesia de San Pedro.

Julie told me that she and her husband, David, are Texas natives.  Seven years ago they sold their home in San Miguel to relocate to Pozos.  When they bought the property here, it was a stark ruin.  All that stood on the land were some walls and a few old arches.  In three years, David’s civil engineering background and Julie’s self-taught architectural design skills have transformed the site into an inviting inn.  On the lower level they have opened a bar cantina with a wood burning fireplace.  One wall displays a hand painted mural of the imagined town as a mining mecca.  As I later discovered, the cantina has become a late night gathering spot for the nexus of artists who are creating new lives in this old ghost town.

David turned out to be an enthusiastic guide to Pozos’ mining history.  At dawn the next day we set out in his truck and drove through fields of cactus and mesquite to the area’s oldest mine called Santa Brigida.  At the entrance to the complex, three stone pyramids rose up.  These hornos, or ovens, built in the 16th century by Jesuit priests, once smelted the mine’s ore.  In the early morning mist, they stood like sentries, guarding the spirits and dreams of those who toiled here.

In a field opposite the hornos, an abandoned hacienda, white with rust colored cornices, dominated the skyline. We wandered among the fields, climbing over crumbling stone walls past a watch tower fitted with rifle slits. Obviously security was a concern during the area’s heyday but now the stillness only enhanced the beauty of the ruins.  David repeatedly warned me to keep an eye out for open mine shafts.  This is the one serious danger in the area.  One must not explore the unprotected mines without a guide.

Heading back to the inn, I speculated on the morning’s activity.  I had just explored 400 years of history surrounded by otherworldly serenity with a complete absence of tourists.  I had done this on foot after driving a few miles from a welcoming waystation in a tiny city permeated with authenticity.  Few places in the world offer visitors such luxury.

I spent the afternoon exploring the inn’s beautiful gardens filled with native cactus plantings and striking sculptures done by local artists.  That evening an adventure of a different sort occurred when, during dinner at the posada, I met some of the local residents responsible for Pozos’ reincarnation.

Entering the cantina I noticed a small group who had pulled several tables together.  They were so friendly that, within minutes of sitting down, I was invited to join them.  They turned out to be mostly locals, full and part time residents.  Sitting next to me was the artist, Janice Freeman.  She told me that she and her husband, renowned photographer Geoff Winningham, a professor at Rice University, live part of each year in Pozos where they have built a home equipped with a darkroom and art studio.  Some of the group exchanged comments about their horseback riding treks in the surrounding mountains. Others talked about an upcoming weekend art walk.

The Pozos Artwalk weekend event benefits the Pozos Children’s Project, an outreach program where eight students from Rice University under the direction of Winningham and Freeman mentor school kids.  This year they worked with 20 village children and guided them in the creation of 39 large scale black and white photographs and 20 color monotypes.  Their work was presented as part of the annual “Open Studios” weekend.

Ten art galleries — typically open on weekends — cluster around Pozos’ main square.  Shopping is naturally limited in Pozos but unusual finds exist.  The city has a strong tradition of indigenous music and the craftsmanship of handmade instruments.  A few shops display and sell hand carved pre-Hispanic style musical instruments and it’s even possible to serendipitously hear an impromptu concert.  This ancient tradition is memorialized each July in the annual Toltequidad Festival in town.

Two shops in town specialize in mineral specimens and geodes.  After admiring an especially enticing crystal in one shop, I asked, “Quanto es, por favor?”  Mistakenly translating the figure from pesos to dollars, I came up with a $15 asking price which seemed fair. Only after stepping outside the tienda did I realize that I had actually paid about $5 for a treasure that would have easily garnered ten times as much at home.

When I left Pozos the next morning, I knew I wanted to return.  I had discovered much but felt I’d barely scratched the surface.  Gold and silver once attracted thousands.  The ruins left behind deep in the Sierra Gorda Mountains still draw seekers looking for a richer life story.

Lodging can also be booked through Mexico Boutique Hotels which offers reliable recommendations to small, luxury hotels in Mexico.  Telephone from USA and Canada: 1-800-728-9098.

Weather in Pozos is temperate due to the elevation.  Summers are sunny but never hot, winters are cool to cold.   An Art Walk/Open Studios Weekend is planned for sometime in January or February, 2009.

How to Get There:

Pozos is part of the municipality of San Luis de la Paz, some 8 kilometers to the north.  From Mexico City, Pozos is a 4-hour drive on Highway 57.
Pozos is less than an hour’s drive from San Miguel de Allende which can be reached via the international airport at Leon, Guanajuato.  Mexicana, United, and American Airlines fly direct to Leon from Oakland, San Francisco and Los Angeles, California. Continental Airlines flies non-stop from Houston.
From San Miguel, a car and driver cost approximately $40 USD.  One can also arrange direct transportation from the Leon airport to Pozos.